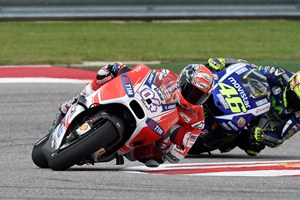 THE Ducati Team were on the podium once again as Andrea Dovizioso finished the Red Bull Grand Prix of the Americas in second place proving the GP15 is competitive.

Dovizioso also finished in second place in the opening round of the 2015 MotoGP season in Qatar, but this is not a fluke. The Ducati Demosedici GP15 now appears to be a competitive machine amongst the likes of the Honda RC213V and Yamaha YZR-M1.

The Italian rode aggressively from the start and led for the first four laps before being passed by Repsol Honda’s Marc Marquez.

Dovizioso was then left to battle for second with former team-mate Valentino Rossi, who passed him on lap 8, but managed to regain the lead on lap 16. The Ducati Team rider gained a slight advantage to take the chequered flag in second.

“Today was a superb race,” said Dovizioso. “And I take enormous personal satisfaction from it because here at Austin the races are always special: on this circuit you have to administer your energy, your tyres and your pace, something that does not happen in other circuits.

“I am particularly pleased with the work of my team because on a completely different track from Losail we confirmed that the GP15 is competitive and we managed to improve during the weekend.

“This year we have already had two great races, but we must continue to work because we’re still lacking a bit of fine-tuning in braking and traction, small improvements that will make the difference when it comes to fighting for the top positions at every circuit.”

Due to finishing second for a second time, Dovizioso is now third in the MotoGP Championship standings, only one-point behind Rossi.