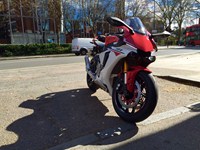 I SPENT the last week riding the new R1 around the UK and tried my hardest to find something to complain about. Instead, I ended up desperately wanting to own one.

So if you’ve got £14,999 burning a hole in your pocket, here are nine good reasons you should go out and spend it on Yamaha’s latest superbike.

(And if you can’t afford one, just pretend you can and blag a test ride. It’s worth it.)

Just look at it. When Yamaha teased us several months back with its #WeR1 launch campaign, a mere silhouette of the bike was enough to get our pulses racing. And that’s before we got to lay our eyes upon those razor thin LED lights, the slash cuts in the fuel tank and the R1’s tail piece that looks the business from every angle. And to top it off, it looks even better in real life than it does in pictures. Kawasaki H2 aside, when was the last time anything this awesome came out of Japan, and wasn’t just a concept?

A bad electronics package can be nothing more than a complete nuisance. Traction control that steps in at the slightest whiff of throttle, ABS that kicks in prematurely, and user interface so irritating you end up wanting to just do away with the whole system.

Then there are advanced systems like on the Ducati Panigale 1299 and BMW S1000RR – so good you’d be mad to turn them off.

And then there’s the R1 system, the best we’ve seen yet. You get traction control, stability control, cornering ABS, launch control, wheelie control, power modes and a quickshifter. And the best part? It’s all easy as pie to adjust thanks to a big b***on wheel that lets you navigate through a menu even my granny could figure out.

Alright, so for £14,999 perhaps it’s not surprising you get the usual goodies like adjustable suspension, powerful brakes and other trick parts. But the R1 gets an aluminium fuel tank, an exhaust system built almost entirely out of t**anium, and numerous magnesium parts. Even the wheels are made out of magnesium. All of this helps shed impressive amounts of weight, which brings me to my next point…

The new R1 is ridiculously light

Ever heard someone wish they could have litre-bike power in a 600cc package? Well, now they can. Yamaha claims it tips the scales at 199kg wet and no part of the riding experience suggests that claim is a porky. It’s tiny and feels utterly brilliant to ride.

The headlines figures alone are impressive: 200hp and 83ft.lb torque. That’s 17hp up on the old model and enough to make most things look like their standing still. But numbers really tell only half the story. The power delivery from the R1’s cross plane engine is utterly addictive and infinitely more exciting to exploit than inline-fours with a conventional firing order. The throaty and slightly raspy nature of the engine at low speeds disappears as soon as you crack open the throttle. Naturally, it misses out on the low down torque of the Ducati’s engine but makes up for it with a strong linear power curve all the way up to the redline.

Listen to the sound of happiness.

Combine all those trick components with one of the best chassis’ on a production sports bike and it’s little surprise the new R1 knows how to get around a corner quickly. That short wheelbase means minimal effort is needed to tip the bike in, the steering is neutral and light, and the adjustable suspension – whilst firm – does a pretty great job of offering a comfortable ride on the road.

I know, I know, electronics are boring, but when they’re this good they’re surely worth an extra mention. Instead of using ‘only’ wheel speed sensors to monitor whether you’re being too exuberant with the throttle, the R1 has a small onboard computer that feeds off data from gyros and accelerometers. The gyros measure pitch, roll and yaw, whilst the accelerometers detect forward, back, sideways and vertical movement, and they do it 125 times per second. Someone did manage to high-side the bike on the press launch in Australia though, so it’s not completelyt***-proof.

As if the standard bike wasn’t cool enough, there’s also a higher-spec limited edition model called the R1M. It’s got semi-active Ohlins suspension, carbon fibre bodywork and a slightly fatter rear tyre. It costs £3,500 more than the standard bike, which gets you a GPS-enabled data-logger, a different paint scheme, and a polished aluminium tank and swing-arm.

Bad news though, all 75 allocated to the UK have found owners already.