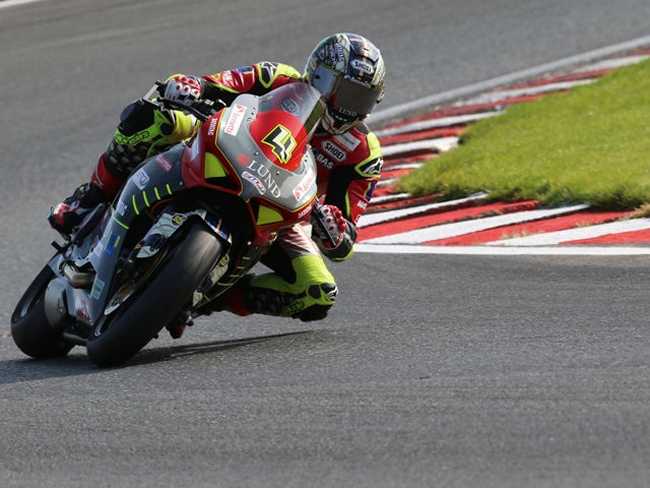 John McGuinness was ‘delighted’ with his performance in the opening Ducati TriOptions race at Oulton Park as he clinched his best result of the season to date.

Riding the Lund Group Ducati, the 23-time Isle of Man TT winner finished in fourth place in race one at the Cheshire circuit.

The result should have given the 48-year-old a second-row start for race two, but an electrical issue on the warm-up lap meant he had to start from the rear of the grid, with McGuinness battling his way through to ninth place at the finish.

“It’s been another weekend of two halves – delighted with Saturday’s result but slightly disappointed with Sunday’s,” said McGuinness, who is sixth in the championship with two rounds to go.

“I’ve always enjoyed Oulton and felt I could make a good go of things this weekend and although seventh in qualifying could have been better, I made amends in the race. I made a good start and put in some good, consistent laps, particularly at the end, and to take fourth, my best result so far, was very pleasing,” he added.

“I felt confident of a repeat performance on Sunday but, unfortunately, when I set off on the warm-up lap, the bike was misfiring like mad. I switched it off and on again a number of times to reset everything but it wasn’t until I got back to the line that it properly fired up.

“Starting from the back of a grid, no matter what the Championship, is always hard and once I’d got into tenth, I wasn’t able to close the gap any further. With Carl (Stevens) crashing, it put me up to ninth and with 20 points in total, it’s been a solid weekend.”