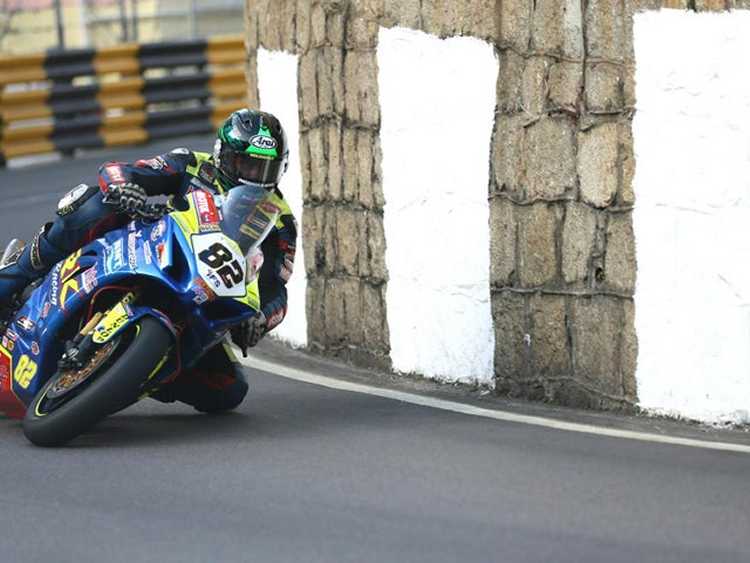 Derek Sheils on the Burrows Engineering/RK Racing Suzuki at the 2019 Macau Grand Prix.

Northern Ireland’s Burrows Engineering/RK Racing team will miss November’s Macau Motorcycle Grand Prix for the first time in seven years
due to a series of tough Covid-19 measures required by the race organisers.

Overseas competitors and teams must quarantine for 14 days in a hotel on arrival in Macau prior to race week, potentially extending the trip to the Far East to an impractical five weeks should riders and personnel also be required to quarantine upon their return to the UK.

The current rules imposed by the Macau Grand Prix Organising Committee have led to a number of regular riders at Macau pulling out of the event, which is scheduled to take place from November 19-22. The 54th edition of the motorcycle race is due to take place on Saturday, November 21 around the Guia street course.

Co Down’s Davy Morgan, who made his Macau debut in 2012, is among the non-starters, while top Republic of Ireland rider Derek Sheils has previously stated that he is unwilling to take five weeks off work to compete at the end-of-year race.

Paul Jordan from Magherafelt is also a doubt after Lee Hardy’s RAF Regular & Reserves Kawasaki team deciding against making the trip this year, while Fermanagh’s Lee Johnston, who returned to Macau last year after missing the event in 2018, decided at the beginning of this year that he would skip the race.

Dungannon team owner Burrows, whose team first went to Macau in 2014, told the News Letter it simply wasn’t practical to travel to Macau with the restrictions in place.

“We have taken the decision as a team that we won’t be going to the Macau Grand Prix this year,” he said.

“Paul (Jordan) was originally supposed to race at the event for Lee Hardy’s team but if the restrictions were different, I guess we would have looked at going again because we have been every year since 2014.

“The organisers required overseas riders to quarantine for two weeks in a hotel when they arrive over there and then you have race week, plus you would probably have to quarantine again when you came back from the event, so to be away for five weeks is just not practical.

“Macau is a bit of a holiday race at the end of the season, but we didn’t have a season this year so we don’t need a holiday!,” Burrows added.

“Over the years Macau has been a very good event in terms of bringing teams and people together, compared to being the paddock for example at the North West or TT when it’s a lot more competitive, but at Macau all the teams help each other out and from that point of view the guys will miss it.

“The requirements with the quarantine situation will rule a lot of riders and teams out this year because to be gone for five weeks is just not an option for us.”

However, Burrows does intend to return to Macau again in the future if and when racing can return under more normal circumstances.

“If everything goes back to normal in the future then I’m quite sure that we will back at Macau as a team, and I’m sure the organisers will want to continue running the race,” he said.

“Going forward, you have to ask whether or not we will even have any international races in 2021 when you look at how things stand right now. There’s so much uncertainty and the coronavirus is obviously not going away.”

The Macau Motorcycle GP is one of the flagship races at the event along with the Formula 3 cars, FIA GT World Cup and FIA World Touring Car Cup round, which have all been replaced by races targeted at local and regional participants.